Register for more free articles. Sign up for our newsletter to keep reading.

Get local news delivered to your inbox!

Back to homepage
Subscriber Login
Please subscribe to keep reading. You can cancel at any time.
Loading&hellp
You have permission to edit this article.
Edit 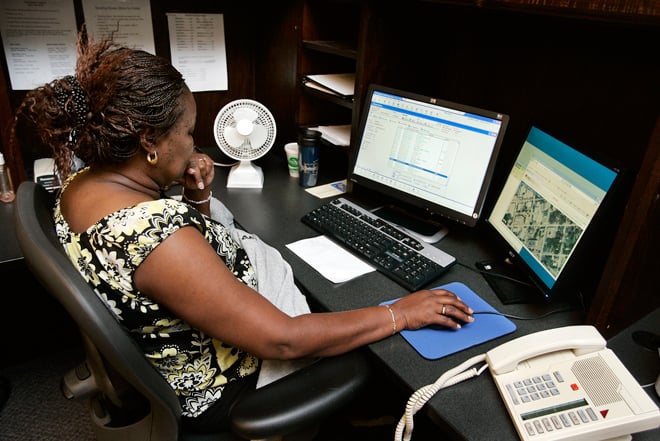 Sex offenders are monitored at the office in Raleigh. An offender’s location can be found anytime, but none are monitored constantly. 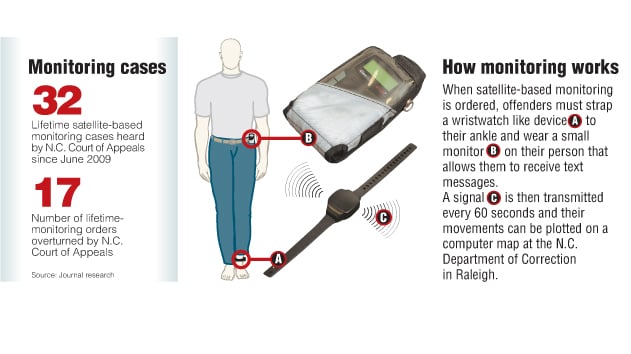 ANKLE BRACELETS: NOT A SOLUTION TO RECIDIVISM

When Greensboro police went to arrest Tony Hughes on charges of having sex with a 14-year-old girl, it didn’t take much of a manhunt to track him down.

He left a trail of digital breadcrumbs behind him.

Hughes, 36, who had previous convictions for indecent liberties and failure to register as a sex offender, was already being tracked by the state using satellite-based monitoring. When they received a new complaint about Hughes in June, all police had to do was call Department of Correction officials in Raleigh, who were able to identify Hughes’ location with an accuracy of about 3 feet, thanks to a GPS device strapped to his ankle.

The device helped police capture Hughes, but it may not have prevented him from re-offending. Police accuse Hughes of having sex with the girl 11 times while he was wearing the ankle bracelet.

The case points out the problems of satellite-based monitoring, which North Carolina’s legislature approved in 2006. A Winston-Salem Journal review of the program has found many flaws, not the least of which is that the concept as it was pitched — a solution to protect the public once sex offenders are released from prison — is simply not true.

Not only can offenders such as Hughes easily commit new crimes, but those wearing ankle bracelets aren’t being watched that closely by the state, which is spending nearly $500,000 a year on the program.

In fact, your car’s GPS device may do a better job of telling you where the next McDonald’s is than the state can do to tell you a sex offender’s whereabouts.

“I will not ever say it will prevent crime,” said Hannah Rowland, the state’s director of the satellite-based monitoring program. “If they’re headstrong enough, you can shackle them to the door, and they’re still going to do it.”

Clemmons lawyer Robert Ewing has represented several sex offenders who have challenged the law through the state’s higher courts. He said he thinks that satellite-based monitoring “could help society.’’

“But, ultimately, it does not stop crime,’’ Ewing said. “That’s really the whole crux of it.”

In an effort to address some of the concerns raised by the law, the N.C. Supreme Court recently took the unusual step of accepting an appeal of a satellite-based monitoring order directly from the trial court rather than through the Court of Appeals.

The case involved Kenney Bowditch and two other sex offenders from Buncombe County who, in separate cases, had pleaded guilty to multiple counts of taking indecent liberties with a child.

They appealed, contending that because they were convicted before the monitoring law was in place, it shouldn’t apply to them. In legal terms, that’s called an ex post facto argument. In a 4-3 vote, the court ruled against Bowditch and the two others.

But in a dissent that argued that the technology was more trouble than it was worth, Justice Robin E. Hudson — joined by two other justices — put her finger on the limitations of satellite-based monitoring.

“The program does nothing to bar enrollees — those at high risk of recidivism — from abusing a child anywhere, at any time,” she wrote.

Even worse, Hudson said, the program may be providing a false sense of security, because it gives the impression that most attacks against children come from strangers.

In fact, studies have shown that the vast majority of child victims know their attacker and often are living with them. That was also true of most of the more than 30 satellite-based monitoring cases that the N.C. Court of Appeals has decided since June 2009.

Not up to it

It was part of a national wave of programs that began around that time after money for pilot programs was made available through the federal Adam Walsh Act. Florida had started lifetime GPS monitoring for child molesters one year earlier. It was called the “Jessica Lunsford Act,” named for the 9-year-old girl whose abduction and killing at the hands of a convicted sex offender drew national attention.

The program is designed to target the state’s most dangerous offenders. As of July, there were 492 sex offenders enrolled in the GPS program, though many were not yet wearing the monitors because they were still in prison. That number had been projected to increase to 699 by the middle of next year, but state officials acknowledge that a lot will depend upon what happens in the courts.

In recent years, consumer GPS devices have become commonplace. Many drivers have become accustomed to using their devices to help them find the nearest restaurant, gas station or movie theater.

So it’s easy to imagine that the same technology is being used to keep predators away from schools, parks or other places where children gather.

But the technology isn’t set up to work that way, Rowland said. The state doesn’t have the money or manpower to program into the system all the possible places statewide where children could be found, she said.

The result is a system that lacks constant vigilance of the state’s most dangerous offenders. Rather, the system is based on occasional, somewhat random checks of offenders that provides little context about what they might be doing.

Such an approach is typical of GPS programs around the country, said Jill Levenson, an associate professor at Lynn University in Florida and an expert on sex-offender monitoring.

“When people hear GPS, they automatically assume this is done in real time with someone watching the screen,” she said. “Typically, it is more passive.”

In North Carolina, local probation officers are able to set up what’s known as “exclusion zones” — neighborhoods or other places where the officer has determined the offender should not be. If an offender enters an exclusion zone, technicians in Raleigh let the local officers know, and the offender gets a text message warning him to leave.

“It allows the offender the opportunity to self-correct,” Rowland said. “So it’s not all about nail ’em and jail ’em.”

Since January, sex offenders have violated exclusion-zone boundaries more than 1,300 times, according to program statistics.

The exclusion zones are set up only for offenders who are still on probation, and many of them are not.

Of the 274 offenders being tracked as of July, 113 — about 41 percent — were not under any kind of probation, a Journal analysis of the sex-offender statistics found.

Although their movements could be monitored, tthese non-probation offenders were allowed to go anywhere. No notice was sent if offenders went to a school, a day-care center, a mall or anywhere else.

Monitoring of sex offenders takes place on a desktop computer in a secured office at the DOC’s headquarters in Raleigh.

Twenty-four hours a day, seven days a week, a technician can select an offender’s name from a watch list, and a map comes up showing the location, direction of movement, even how fast the offender is going.

But there aren’t a set of eyes on each offender all the time. The whereabouts of offenders are checked randomly on a spot basis.

Even when there is an alert, it’s not always immediately heeded.

According to testimony before the state Supreme Court this year, the system loses signals so often that the monitoring staffers frequently don’t immediately react when an alert comes in.

Rowland said that the technology is the same as is used for cell phones, and like cell phones the signal can be dropped. She said that all alerts are eventually checked.

Just as GPS units in a car lose their signals in a tunnel, the GPS devices that sex offenders wear are prone to dropping their signals when an offender goes indoors, particularly if it’s a big building with lots of steel.

The satellite signal also can be lost during bad weather or if offenders wear heavy clothes over the equipment.

“We all agree that innovative approaches are necessary to minimize, if not remove, any contact between vulnerable children and those who would prey on them,” Supreme Court Justice Hudson wrote in her recent dissent. “A review of the transcripts and exhibits shows that this program does not protect the public in any effective way.”

State Rep. Julia Howard said she agrees with those who cite the technology’s limitations, but believes that the program still has value.

“If a child is taken or if a child is missing and there’s a sexual predator in the area, we need to know immediately — where is he?” she said. “I would like for law enforcement to have a computer screen with bells and whistles that at any given time they could click on and know where people are,” she said. “That’s the perfect system. We don’t have it yet.”

She said that getting to that perfect system, even if were technologically possible, would be difficult, given the state’s budget woes, although small steps in that direction could be possible.

In the meantime, she warned parents not to let the program give them a false sense of security.

“Don’t think that because a bill has passed that it’s 100 percent safe for their children, because it’s not,” she said.

Levenson said that the system can be a valuable tool to law enforcement, which can identify suspects if a crime has occurred or even exonerate offenders accused of a crime by showing that they were somewhere else when the crime took place.

It also may work as a deterrent for some offenders wearing the device, she said, but it has not been shown to stop crime.

“Law enforcement and the public need to be aware of limitations and be realistic in their expectation of what GPS can accomplish,” she said. “It really isn’t a preventive tool per se.”

Get local news delivered to your inbox!

Related to this story

Ask SAM: Why is the Chick-fil-A in Kernersville closed?

Q: Why is the Chick-fil-A in Kernersville closed? When will it reopen?

In what its creators call “a symbol of invasive hope,” a giant aluminum and stainless steel dandelion will soar 40 feet above Salem Parkway in…

They thought this was a fish kill on an NC lake. Bizarre scene was actually caused by thousands of molting flies.

On Thursday, Yadkin Riverkeeper responded to a homeowner off of High Rock Lake reporting what appeared to be either a fish kill or a harmful a…

A Wilkes County woman was arrested Monday after she led Winston-Salem police on a chase, and then crashed her car in eastern Yadkin County, au…

Police: Men lured victim to Target in Winston-Salem before assault. They were using a 'Meet Up' app, investigators said.

Nearly a week later, police are releasing more details about a bizarre incident at Target, saying for the first time that someone was actually…

Superintendent Tricia McManus will make $250,000 a year, a $35,000 raise, making her the highest paid superintendent in the district's history.

A woman and the passenger in her car were charged on outstanding warrants on Sunday, police said, after the woman refused to stop for police a…

A Winston-Salem woman was arrested Wednesday after she was accused of shooting her ex-boyfriend last Friday, authorities said.

Unbelievable! This is the moment after a gunman opened fire in a crowd in Philadelphia

Sex offenders are monitored at the office in Raleigh. An offender’s location can be found anytime, but none are monitored constantly.

ANKLE BRACELETS: NOT A SOLUTION TO RECIDIVISM

Get up-to-the-minute news sent straight to your device.